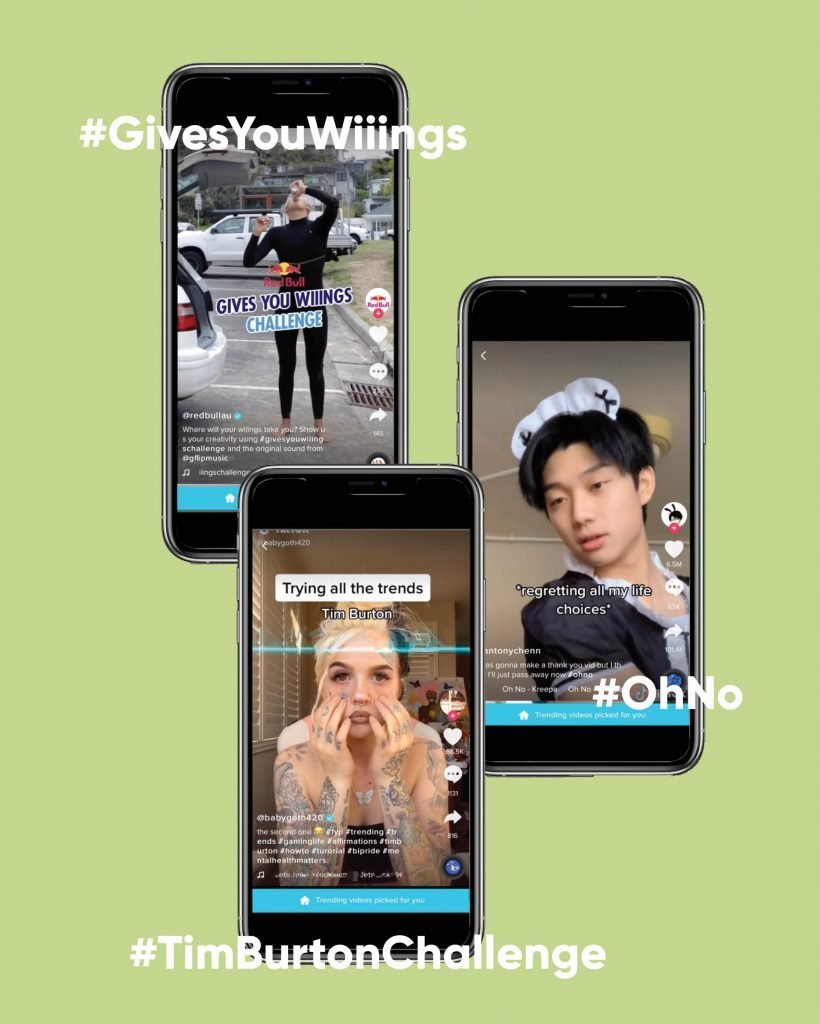 Whether you're a TikTok user or not, these content videos are a must see for everyone who wants to feel all the feels - from creepy to fun.

While some of us are wondering if TikTok is even still a thing after Reels started taking over, the young and savvy generation are still going strong and are more active than ever. To get caught up on all the newest challenges, video’s to imitate and hashtags to follow in just under 5 minutes, have a read below of the top current TikTok trends.

Clocking up more than 13 billion views on the app is #OhNo, one of the top-trending hashtags of the past week. Initially applied to gamers, the soon-to-be iconic trend has evolved to apply to a range of relatable and hilarious real-life disasters. It is a prime example of how easy the content crossover between the gaming world and real life has become.

“Yikes” is probably the most common reaction that viewers respond with to the #TimBurtonChallenge. Thanks to the trending challenge that channels the characters of Tim Burton’s iconic films, the time warp scan effect is being used to transform people into eerie, ill-looking characters similar to those Burton’s iconic film franchises. To round the eerie experience off, the content is accompanied by Ashton Gleckman’s “Ice Dance” theme song from Edward Scissorhands. While this challenge has caught on a just little late for Halloween-lovers, the creepy factor still hits hard all the same as far as trends on TikTok go!

Despite only joining the TikTok world in mid-November, it comes as no surprise that Billie Eilish has instantly become one of the apps’ top-trending creators. With over 317 million views across just three videos, it seems as though fans are loving getting a real-world insight into Billie’s lockdown antics. It’s probably fair to say that boredom is a driving factor behind Billie’s posts, with the pop star experimenting with filters and even attempting to fit a ukulele head in her mouth!

The ‘Red Bull Gives You Wings’ slogan has been giving us all a familiar ring in our ears for decades now, but Red Bull Australia just issued a fresh challenge to their loyal fans via the TikTok world. The #GIVESYOUWIIINGSCHALLENGE features Red Bull fans using their creativity and video editing skills to showcase themselves using their wings to “fly” through the air via a series of compiled jumping shots with maximum airtime. Partnered with a soundtrack from G-Flip developed specifically for this challenge, it encourages participants to be as weird and wild as possible.

Close to home and setting a feel-good vibe leading into the festive season, The Body Shop Australia have teamed up with singer/activist Siala for a TikTok challenge that aims to end female homelessness across the nation. #SheLikesYouAndMe, which has accumulated over 213 million worldwide views, challenges TikTok users to duet Siala and her new spin on iconic 90’s track ‘Gypsy Woman (She’s Homeless)’. For every user that posts their own duet, The Body Shop has agreed to donate $5 to the Launch Housing Charity, which provides housing for homeless women and children all Australia.

If all of these TikTok trends isn’t enough incentive to get creative, we don’t know what else is.