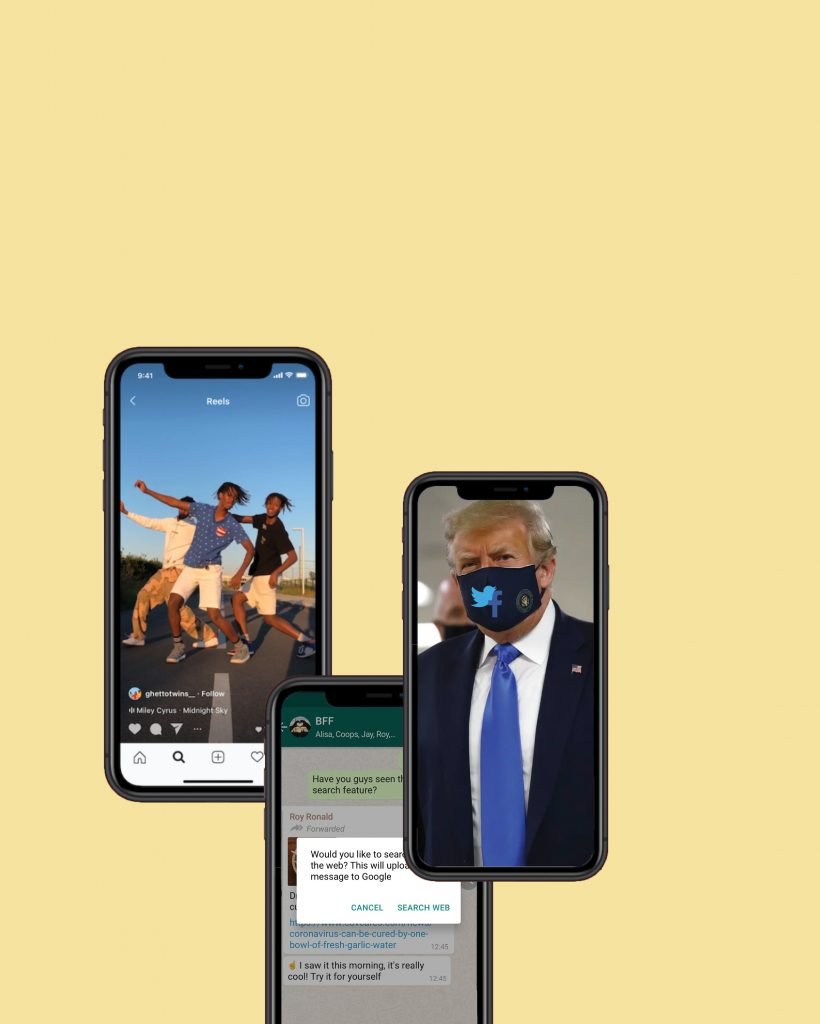 Reels is finally available in Australia, Twitter once again puts a limit on Trump and WhatsApp introduces a fact checking feature.

A handful of countries have test trialed Reels already, but today us Aussies awoke to find the TikTok clone on our Instagram feeds! Australia was one of 50 new countries to get the update. To recap Reels, it’s a short-video format incorporating music, audio and visual effects. The launch of Reels comes at a strategically well positioned time: while TikTok is under fire, being banned in China and India recently, possibly for sale in the US, and entering a political discussion in Australia, Reels has the potential to pick up the slack. Tackling the main issue TikTok faces, privacy and data safety, Instagram assures that a full range of privacy and safety features is implemented into the new feature, enabling users to manage who can view their content, and who cannot.

Will Easton, Managing Director of Facebook in Australia & New Zealand reasoned the recent launch on users desire for short-format-videos:“Instagram is where millions of Australians come everyday to express themselves and be entertained. Our community is telling us they want to make and watch short-form, edited videos, which is exactly how we’ve developed the Reels experience. Whether you are a creator with a passion to share or a business with a story to tell, our new Reels format empowers your creativity and helps you reach new audiences on a global stage.”

One of Australia’s most liked Comedian duo, The Inspired Unemployed, have eagerly jumped onto the feature, with already 14 videos to date. Similar to IGTV, there is a new tab to be found specifically for Reels, but the videos can also be posted and linked in their Feed. The Inspired Unemployed’s Content is particularly entertaining due to their cultural referencing and self humouring content. Have a look for yourself!

After a large number of companies have boycotted Facebook in the past month for not limiting hate speech, due to how the platform handles misinformation and its passive approach on controversial political posts, Facebook made a public move against the President of the United States. Following in the footsteps of Twitter, who has already restricted his tweets by marking them as false information and adding context to his claims, Facebook removed a post from the President stating false claims about COVID 19 on Wednseday, August 5th. The post was about an interview of Fox News and Trump, claiming that a group of people, in particular children, are almost immune to COVID-10, “which is a violation of (Facebook’s) policies around harmful COVID misinformation” according to Facebook spokesperson Andy Stone.

A spokesperson of Trump’s campaign, Courtney Parella, responded to Facebook’s post takedown that the president was simply “stating a fact that children are less susceptible to the coronavirus”, accusing Silicon Valley of holding a bias against the President and his social media presence.

And further on the topic of misinformation, WhatsApp has also implemented fact-checking. In line with recent in-app advances, such as Spotify enabling in-app shopping, and Snapchat offering in-app apps, WhatsApp has now also launched their newest in-app feature: a search function to assist users to Google search fo additional context to a forwarded link.

WhatsApp explains: “Today, we’re piloting a simple way to double-check[the content of forwarded] messages by tapping a magnifying glass button in the chat. Providing a simple way to search messages that have been forwarded many times may help people find news results or other sources of information about content they have received.” A little magnifying glass will pop up next to a link message that gives the option to search the web about this topic. This way, WhatsApp is trying to limit false information circling through messenger chats.