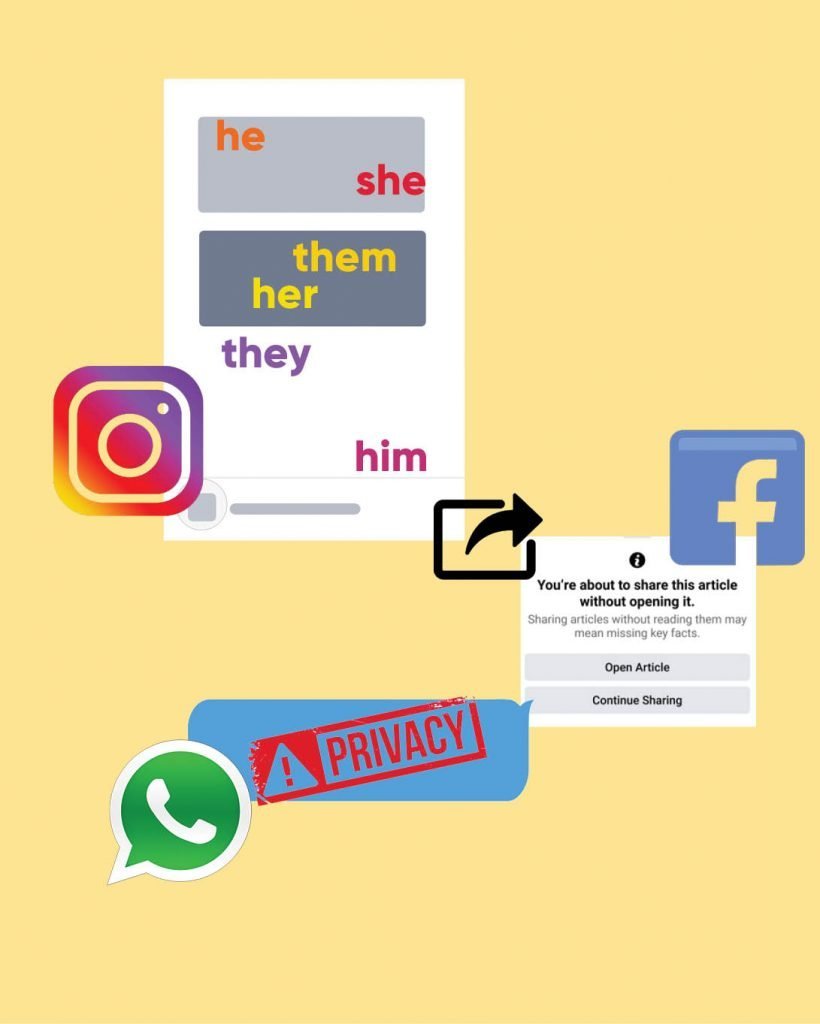 In an effort to be more inclusive, Instagram has added a ‘pronouns’ option to its latest app update, meaning individuals who don’t confirm to gender norms have options for how they want to be presented and referred to on social media. This comes as part of a greater movement across social media, with LinkedIn also recently adding a pronouns option as part of its user profiles.

If you have the most recent Instagram app update, the new option is listed in your profile settings under ‘Edit Profile’>’Pronouns.’ Once you’re in, you can choose your identifiers.

While this change may not affect all social media users, for the percentage it does, it’s no doubt a huge step in the right direction towards radical acceptance of changing socio-cultural norms.

In a major ‘fake news’ development, Facebook is now following in Twitter’s footsteps, rolling out testing on new alert prompt features that will warn users who try to share an article before opening the link themselves.
As explained by Facebook:

“Starting today, we’re testing a way to promote more informed sharing of news articles. If you go to share a news article link you haven’t opened, we’ll show a prompt encouraging you to open it and read it, before sharing it with others.”

Ideally, this will stop users from reading clickbait headlines that are possibly misleading and sharing content of which they don’t understand the full context. In turn, this would reduce confusion, anger and mob mentality on the social platform.

Back in January, the app’s first attempt was foiled when users expressed such strong resistance to the change that they had to delay the roll-out, however, as they re-attempt now, they have also introduced a clause that will penalise users if they don’t accept the update! Bold move.

As stated by WhatsApp:
“After a period of several weeks, the[privacy policy update] reminder people receive will eventually become persistent. At that time, you’ll encounter limited functionality on WhatsApp until you accept the updates. This will not happen to all users at the same time.”
Those limitations, which will escalate over time, will include:

From a business perspective, the move makes sense as it needs to facilitate Facebook’s broader messaging eCommerce plans, like enabling Facebook Pay and cross-app connection. However, how users will respond to this forced change, who knows.

If you’re a WhatsApp user, ask yourself how you feel about more of your information being shared with Facebook! But keep in mind that WhatsApp has continually reiterated: “The policy update does not affect the privacy of your messages with friends or family in any way.”