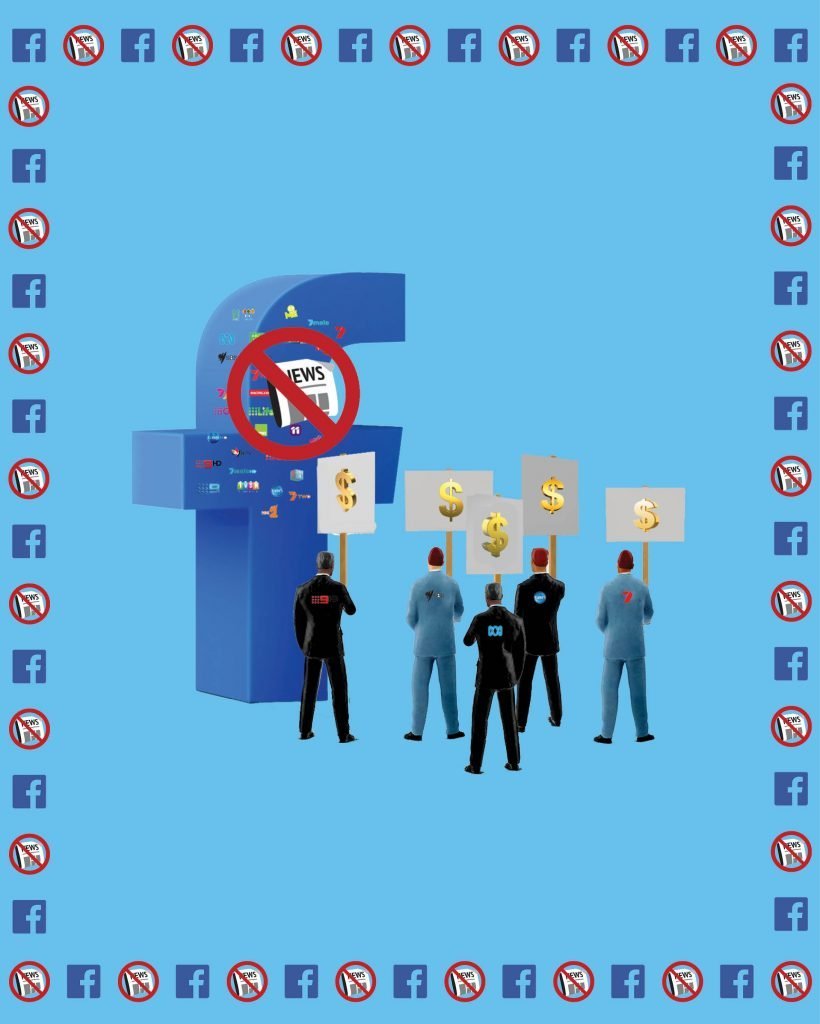 One of the world’s global tech giants is taking a stand against the Australian Government in a major way, say goodbye to news on your Facebook feed!

Facebook’s blocked all news sources in Australia -here’s everything you need to know.

We know our ‘This Week in Social Media’ write-ups usually feature a few stories, but this week, we think it’s fair that we spend a decent amount of time exploring just this one topic!

In case you’ve been living under a rock, in the early hours of the 18th of February, Facebook announced it was barring Australians from viewing or sharing news in response to the government’s proposed media bargaining laws.

These laws aren’t recent news, the wheels were set in motion back in April 2020 when the Australian Government collaborated with the ACCC (Australian Competitor & Consumer Commission) to “develop a mandatory code of conduct to address bargaining power imbalances between Australian news media businesses and digital platforms, specifically Google and Facebook.” This was introduced as a bill to parliament in December 2020, and passed through the House of Representatives on the evening of the 17th of February 2021 with the legislation expected to be drawn up next month.

These laws came about due to pressure from news giants such as NewsCorp, who for years have been lobbying for payment from large social and search platforms for the use of content.

What does this mean?

Under the proposed laws, unless these platforms are able to come to payment agreements with publishers, the federal government will appoint an arbitrator to force them to pay for news content.

Google was quick to react and in June 2020, it announced it was rolling out a new $1bn initiative to support the news industry. Referred to on its website as a ‘licensing program,’ the tech giant stated the purpose of the program was to “…pay publishers for high-quality content for a new news experience launching later this year. This program will help participating publishers monetise their content through an enhanced storytelling experience that lets people go deeper into more complex stories, stay informed and be exposed to a world of different issues and interests. We will start with publishers in a number of countries around the globe, with more to come soon.”

This program has now been rolled out as the ‘Google News Showcase,’ and with the looming threat of the new Australian laws, earlier this week Nine Entertainment Co struck a $30m deal with Google, who own the Sydney Morning Herald and The Age. This five-year deal covers Google’s usage of the corporation’s news articles across its search engine and new features. NewsCorp has also confirmed it will receive “significant payments” as part of a 3-year deal, joining an ever-growing list of publishers such as Seven and Junkee.

However, Facebook has taken a stand. In an unprecedented move, the platform has refused to buckle under the pressure, and earlier this morning it announced the mass barring of news content. Articles from news source pages such as the ABC, Seven News, SBS etc, have disappeared from their respective Facebook pages, and Facebook’s made it clear that people outside of Australia can’t view or share Australian news content, or content from Australian news Pages on Facebook.

A statement from Facebook makes the boldness of the platform’s actions clear, “this is not the outcome we wanted and it’s a step we take reluctantly. The proposed law fundamentally misunderstands the relationship between our platform and publishers who use it to share news content.”

In the same statement, Facebook also makes it clear that it believes it works to benefit these news outlets by generating free revenue, “last year Facebook generated approximately 5.1 billion free referrals to Australian publishers worth an estimated AU$407 million. Despite some of these discussions, Facebook does not steal, take or copy news content.”

Unsurprisingly, the response to the ban has been met with mass outrage from politicians and news sources alike.

This morning, the Australian Communications Minister Paul Fletcher said,  Facebook needs to “think very carefully about what this means for its reputation and standing…they’re effectively saying, on our platform, there will not be any information from organisations which employ paid journalists, which have fact checking processes, editorial policies.’

A Nine spokesperson has called it “unreasonable behaviour” which “nobody benefits from,” and the ABC’s managing director David Anderson expressed his disappointment with the decision, stating “despite key issues such as the COVID-19 pandemic having ongoing effects on all Australians, Facebook has today removed important and credible news and information sources from its Australian platform.”

So, what do we think?

Here at Two Palms, while we’re definitely counting ourselves lucky we’re not currently working in the news arm of social media and content, we’ve also got a few opinions about the topic!

While some of the team admire the strength of Facebook and its daring decision to stand up for its principles, establishing its independence in the face of government interference, others have some reservations…

The first thing that comes to mind is, without proper credibility and journalistic standing behind news on the platform, what’s to stop the rampant spread of falsifications? We already know that Facebook can be a problematic source when it comes to incorrect information (something that was proven by the 2016 US elections and the ‘fake news’ debacle), so now, who will be responsible for ensuring that Australians are hearing the facts? Will this simply push consumers to other platforms like Twitter and Instagram to find their news?

Indeed, research conducted last year showed that almost 64% of Australians were worried about fake news on the internet and were in favour of tech companies blocking political statements that could be considered misleading.

Additionally, if Facebook and Google do come to financial agreements with certain publishers it won’t necessarily be at the benefit of journalists or consumers, and it will potentially hurt many of Australia’s lifestyle and niche media publications who won’t qualify for financial agreements under the code. These publications, including the likes of Boss Hunting and Stab Magazine, are now facing an inability to connect with their highly engaged audiences on Facebook.

Only time will tell how the decisions made today by the Australian Government and Facebook will play out, so for now, we can only sit and wait…and head to Instagram to keep up to date with all the latest news!