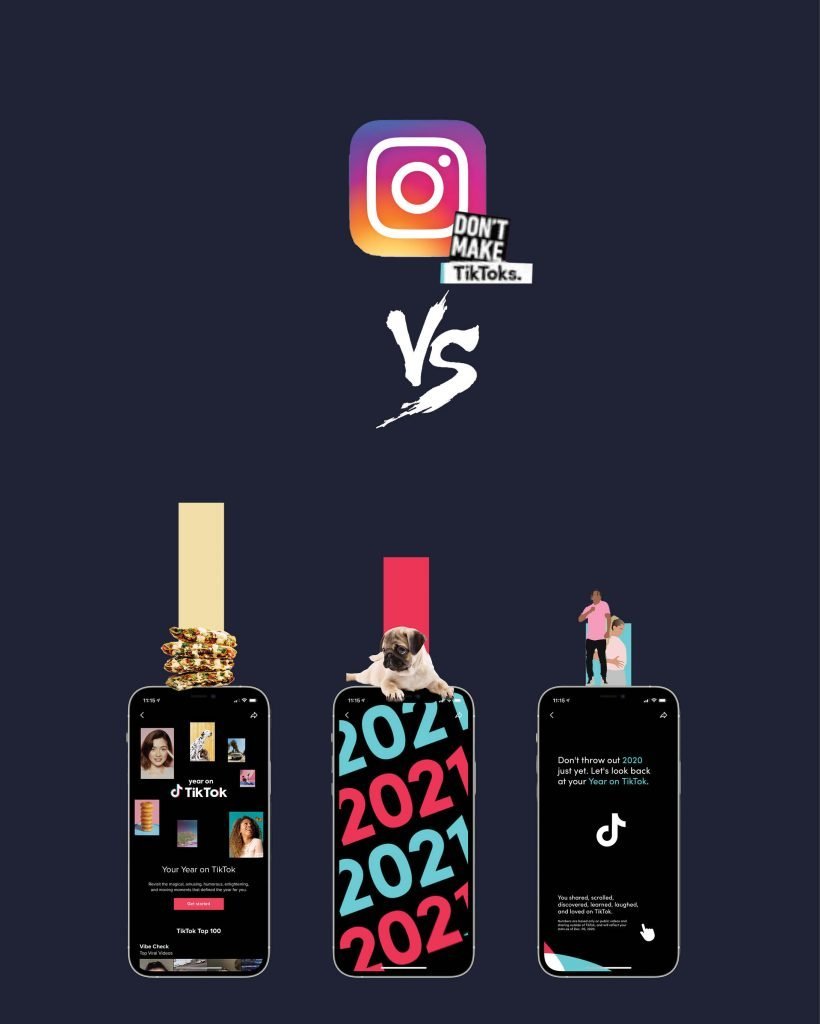 Instagram has taken it's war on TikTok to another level, banning all content with the TikTok watermark. Facebook is steering clear from the two, announcing it's own war on politics.

Instagram made waves this week when it announced this week that it’s making changes to its algorithm to encourage the creation of more original posts on its platform. This means that videos uploaded in the reels format that are covered by text, blurry, or feature a TikTok watermark or logo won’t appear as frequently on the platform’s explore page.

Spokesperson for Instagram, Devi Narasimhan, said that based on data collected from user surveys, people have a “less satisfying” Reels experience when content has been recycled from other apps.

Coinciding with the announcement, the platform released new ‘best practices’ recommendations to give Instagram users tips on how to create content that’s more likely to perform well. Users are being encouraged to post vertical videos that use music found in Instagram’s library or sounds they find on reels.

What do we think…is this an attempt by Instagram to improve user experience, or the platform taking a swipe at one of its main competitors to ensure TikTok isn’t as visible on the app?

As part of ongoing testing, Facebook has announced it will be reducing the level of political content shown on people’s feeds, in an effort to combat negative user feedback about being bombarded with confronting political debates. In a statement from Facebook:

“As Mark Zuckerberg mentioned on our recent earnings call, one common piece of feedback we hear is that people don’t want political content to take over their News Feed. Over the next few months, we’ll work to better understand peoples’ varied preferences for political content and test a number of approaches based on those insights. As a first step, we’ll temporarily reduce the distribution of political content in News Feed for a small percentage of people in Canada, Brazil and Indonesia this week, and the US in the coming weeks.”

It’s also stated that it will be working towards tailoring political content in a ranking system to better understand what political news/topics users are interested in.

This is big news as previously the platform has allowed controversial political – and at times – potentially hateful content to be published and has refused to step in (the reason behind the large scale “Boycott Facebook” movement in 2020). In fact, the algorithm has inadvertently been supporting argumentative content due to the weight it places on interaction and response.

While this feature hasn’t yet been rolled out here in Aus, we’re sure we can all expect to see some changes in this area down-under this year!

This week, TikTok released a new rising trends report featuring predictions for 2021 based on topics that saw significant growth in interest in 2020.

Aptly named the “What’s Next Overview,” see below for the report as explained by TikTok:

“We’ve been looking through nearly a year’s worth of platform performance to help marketers understand which content categories have grown the most significantly, and which remained the most popular ones on TikTok over the past 11 months. These categories are not driven by a single trending hashtag, but rather by a slow, steady shift in consumer interests and behaviours.”

According to the report, the most popular content categories are: Diary/Vlog, Comedy, Video Games, Movie & TV, Pets, Romance, Cartoon & Animation, Cooking, Sports and Outfit. With their top growth category listed as News & Events, which after the year that was 2020, we’re not surprised!

Make sure to give it a read here, and check out our own list of the top TikTok trends!