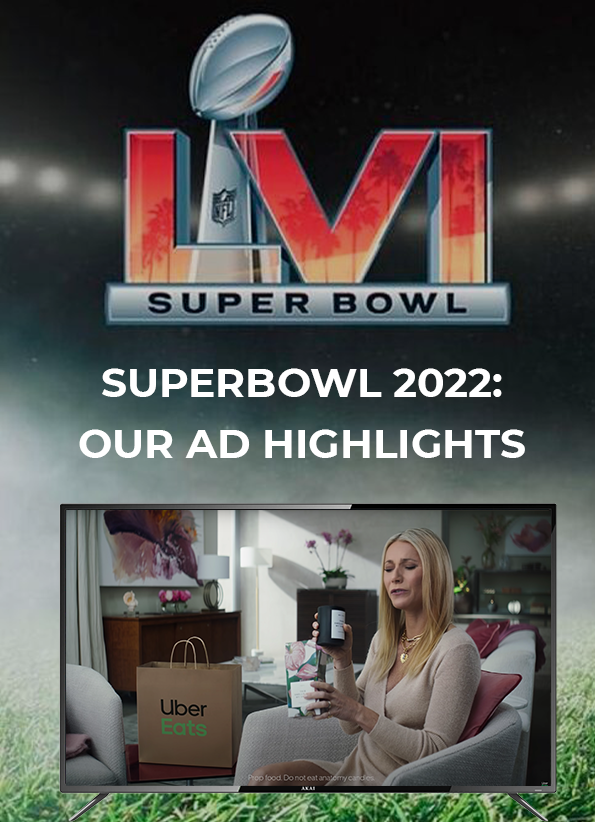 TV commercials are usually what makes any viewing experience a drag, but not for Super Bowl day, ultimately the biggest event of the year for advertisers, who this year spent a whopping $6.5 million for each 30-second airtime slot.

This year’s Super Bowl attracted quite a crowd with over 112 million viewers, and the popular event sure did deliver! For starters, the halftime show was exactly what the Dr Dre ordered. Talk about palms sweaty, knees weak, arms heavy, we weren’t ready to be served up a bunch of our all-time favourite rap artists who played classic 2000s hits that had us reeling with nostalgia.

And as for the ad breaks, humour reigned, a few heartstrings were sufficiently tugged, and celebrities showed up in bulk, ready to play.  Oh, and apparently there was some football playing as well… #GoTheRams

TV commercials are usually what makes any viewing experience a drag, but not for Super Bowl day, ultimately the biggest event of the year for advertisers, who this year spent a whopping $6.5 million for each 30-second airtime slot.

Instead of half of the commercials trying to invoke the pandemic while not explicitly mentioning the pandemic like last year, this year’s collection of ads took a different approach as they largely spoke to a singular goal: Keep👏It 👏Light👏.

After devouring greasy food and watching each and every Super Bowl ad of 2022, in our opinion, here are the standouts (and the ones worth giving a watch).

Lays is not really the top potato chip of anyone’s choice which is why this ad was so effective, it’s a great opportunity for long-lived brands to remind you of their existence. Another plus, it’s given us a moment to sit and enjoy two loveable actors effortlessly doing their thing. Well done Lays, money well spent.

Jennifer Coolidge, Trevor Noah, Gwyneth Paltrow, and Nicholas Braun all eat random household items to promote Uber Eats stepping up their delivery game and honestly, we’re here for it. Whack a trending TikTok tune on top of any ad and every millennial will be glued to the screen, like so.

While every die-hard Zendaya fan also tuned in to the new episode of Euphoria on Monday, Squarespace gave us a catchy Super Bowl commercial where the popular young actress took a well-deserved break from her tiresome role as a drug addict teen.

This year, Squarespace scooped up the Euphoria star in the website-building company’s Super Bowl ad as Sally, an entrepreneur who sells seashells by the (you guessed it) seashore. This ad could be the emerging Super Bowl trend of utilising not only actors/actresses for ads but also influencers, like Zendaya who has a social media following of 129 million. Punny, witty and Zendaya… this one is a gem!

Yes, Coinbase really did spend (assuming a lot of money) on a 60-second ad that amounted to nothing more than a colourful, bouncy QR code that, if scanned, linked to their website. With 99% of Super Bowl ads typically rinsed with famous celebrities, Coinbase managed to break the internet with a simple QR code that we usually scan to enter venues and find out if anyone had Covid-19 at the venue days later.

It demonstrated how insidiously simple a good commercial can be: no celebrity cameos and no massive productions – and to be honest we still don’t understand what Cryptocurrency is but we know this ad had heads turning and phones scanning. #Innovation

Planet Fitness + Lindsay Lohan = THE LIMIT DOES NOT EXIST

Planet Fitness released a Super Bowl ad, laced in Lindsay Lohan that, in our opinion, was simple, catchy and clever. The ad features the infamous train wreck, turning her life right around with a whole crowd asking, “What’s gotten into Lindsay?” As she continues to accomplish things left and right, including beating Dennis Rodman on Jeopardy!, sleeping better and doing some arts and crafts.

It’s super nostalgic for all those early 2000s Lindsay lovers out there and quite frankly, she looks fresher than ever making a gym membership seem like the next best thing! People who were watching this on Monday, downing beers and eating handfuls of chips would’ve definitely considered joining a gym membership after seeing this ad, surely. Lindsay, you’ve gotten yourself out of the burn book and back into our hearts, well done!