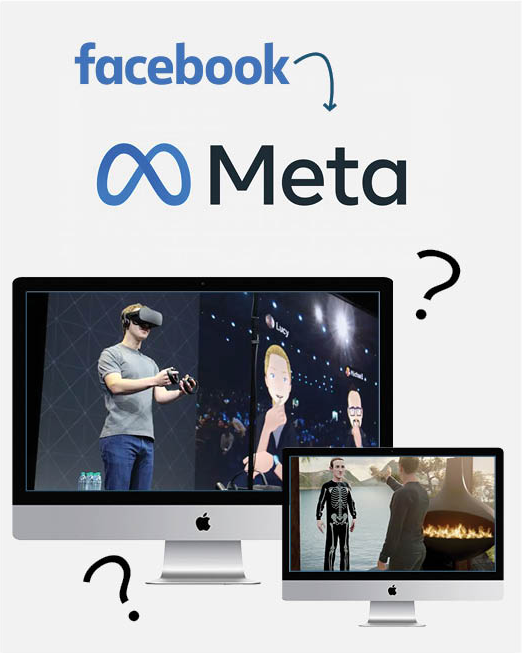 Last week, CEO Mark Zuckerberg introduced Meta, the new company that brings together all Facebook’s apps and technologies under one new company brand.

Gosh what another riveting week it’s been in the world of Social Media. Kim Kardashian was caught holding hands with Pete Davidson, Scomo became an international meme, oh and Facebook announced it now wants to know as Meta? How very Hollywood of them.

Last week, CEO Mark Zuckerberg aka Zuccy introduced Meta, the new company that brings together all Facebook’s apps and technologies under one new company brand.

The major theme we took from this announcement is Zuckerberg’s vision for a so-called ‘metaverse’,  a new digital space ‘to help people connect, find communities and grow businesses that will replace smartphone apps as the primary form of online interaction.

This metaverse will be its own online world where characters live their best lives, can choose their own physical existences and can have three-dimensional digital interactions. The MTV show Catfish would have a field day with this one!

Side note: we can’t wait to pick our 2031 Halloween AI characters in the Metaverse.

Meta also set the bar very high sharing his plans to attract 1 billion users to the metaverse by the end of the decade. A strategic move by them as if this ‘metaverse’ becomes the next way of interacting online, the company will own the blueprint to its design.

Moving away from smartphones

The moving on from smartphones is also a strategic play as Facebook’s platforms have always been through the reliance on companies such as Apple and Google. With the company pushing its metaverse users to Facebook-owned Oculus VR headsets.

We’ve got a #rebrand on our hands people!

Besides the whole futuristic metaverse side of things, to us this looks like a classic company rebrand. Now, many of you may be scratching your heads as to why Facebook would choose to do such a thing. But in the world of Advertising, Marketing and all things PR, this is all too familiar. Businesses and companies are rebranding themselves to their consumers on a daily basis!

Take Kentucky Fried Chicken for example which changed it’s name to KFC in 1991. At the time, America was facing an obesity epidemic (let’s face it they still are) and KFC realised having the connection to ‘fried’ foods probably wasn’t the best look for them, and this helped to distance themselves from the ‘fast food’ controversy. The name change was also a smart move as it let customers know that the restaurant serves more than just chicken.

Like KFC is more than just fried chicken, Facebook is more than just Facebook. The company alone also owns Instagram, WhatsApp, Oculus VR, LiveRail, Beluga, the list goes on. So in the sense it seems fit to rebrand the company to cater for its suite of apps and platforms. The name change is also a branding move to distance themselves from the blow after blow of data breaches, hacks and backlash that’s been surrounds Facebook for years now.

But will changing their name & logo be enough? Only time will tell.

So that’s it from us! Tune in for next week’s TWISM.