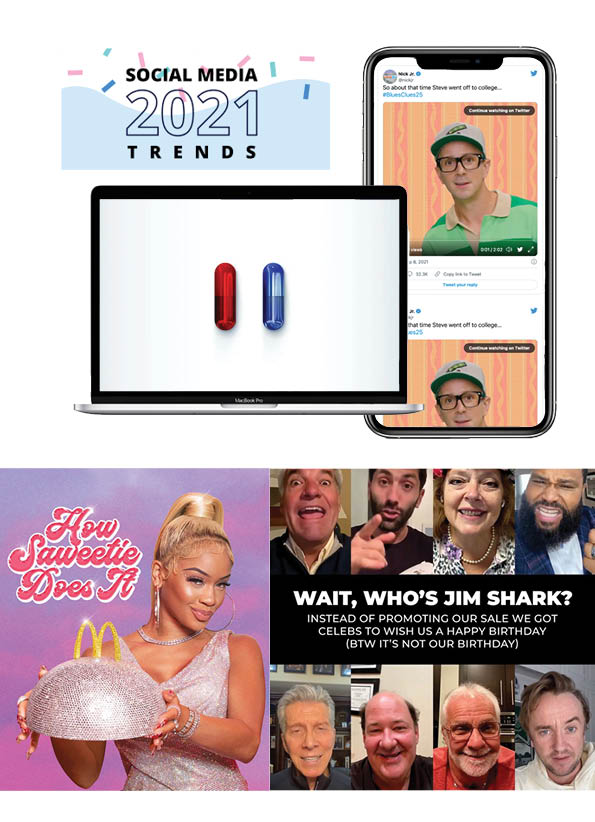 What a YEAR it’s been. Some would go as far as to say 2021 was the year of social media. So for this week in social media, we thought it’d only seem fit to recap some of our favourite VIRAL campaigns that went down on the interwebs in 2021.

Can you believe it’s December already? Gosh, how time flies when you’re in lockdown.

May we kick off TWISM by saying what a YEAR it’s been. Some would go as far as to say 2021 was the year of social media. It became an online place and community where many turned to feel connected through months of uncertainty and isolation. We saw the rise of platforms like TikTok, the video-sharing app which at the start of the pandemic no one had ever really heard of – is now arguably the biggest social media platform on the internet.

… and just like the pandemic, so too did many trends, memes and campaigns go viral, spreading like a bad rash with no ointment across the internet. So for this week in social media, we thought it’d only seem fit to recap some of our favourite VIRAL campaigns that went down on the interwebs in 2021.

“I never forgot you”: Steve from “Blue’s Clues”

In this nostalgia viral Tweet, Nick Jr brought every millennial back to their childhood with a feel-good and heartfelt message from everyone old mate, Steve from “Blue’s Clues”. The campaign was for the 25th anniversary of the show (feel old yet?). Steve checked in with a brief but impactful message which pulled at our heartstrings and struck a chord with the now adults who grew up watching the show.

To create hype over the first official trailer of The Matrix 4, this promotional campaign was executed across multiple social media platforms, with a series of posts that directed fans to a Red/Blue pill interactive site, WhatIsTheMatrix.com. Here users are given the choice between a red and blue pill, which will give them a constantly-changing teaser from the highly anticipated fourth movie. Judging by everyone reactions online, The Matrix fans loved the new-age marketing campaign. It left many people wondering, what even is real anymore?

Even the biggest brands are getting around a good old fashion collab. In 2020, McDonald’s did something unexpected. They released a collaboration meal with Travis Scott, a massively popular rapper and producer. In 2021, the fast-food chain has been collaborating with celebrities left right and centre. Their most recent one and our personal favourite was with American female rapper, Saweetie (see below). Twas a smart move by the fast-food chain, they’ve managed to re-market their already well-know menu items in a modern and refreshing way, finding new ways to spice up what would be your regular ‘Happy Meal’.

Who doesn’t love a bit of guerilla-style advertising? Well, Gym Shark did just that! Pranking a number of celebrities on the shout-out platform Cameo. Disguised as ‘Jim Shark’, the fitness company took to social to celebrate their ‘Birthday’ with some hilarious cameo’s from well know names such as CaroleBaskin & Tom Felton to promote their up to 70% off Black Friday sale. Well played Jim!

On Wednesday, 1 December streaming service Spotify launched its 2021 ‘Wrapped’ campaign, and Instagram stories everywhere were flooded with shares upon shares. For those who weren’t dying from embarrassment, the platform made it oh so easy for you to share your Spotify Wrap on your social media account. This campaign is a personalised summary of how you spent your year listening on the app, powered by your usage data. Kudos to Spotify, they’ve managed to twist ‘we’re tracking your every move’ into a fun and sharable campaign. They went one step further by offering users a curated playlist of your most played songs throughout the year.

And that’s a wrap, thanks for joining us!